As I edged awkwardly out of my preteens with overly dry skin, lank hair, and standing about 4 foot 8, I had a strong desire to become a model-cum-actress after spending hours upon hours of flipping through glossies. I begged my mom time after time to enroll me into modeling schools, take me to LA for auditions, and avidly read seventeen like it held the truth to the universe. Luckily she had the wits about her to say “no” to the thousands of dollars it would cost to enroll me in what was likely a farce of a class, see that I wouldn’t be shooting up the eleven inches it would take to reach international modeling standards, and that like most things I had taken interest in- ballet, horseback riding, the viola- my passion to be a supermodel would peter out in due time.

And it did…for a while. Until I got asked to do my first small modeling gig for Imperial Motion. During that time I was sixteen, the brand was launching their women’s line the first time around, and I had never had the opportunity to work it in front of the camera before other than pretending to be Posh Spice in my bedroom with a disposable camera. After that first shoot, I loved the feeling of picking up a catalog and seeing myself in it. I had given up on really becoming a model at that point though, focusing rather on spending time avidly skipping class, learning to smoke, and obsessing over boys. As you do. Once I left home I did some photoshoots in Huntington Beach that I wouldn’t be caught dead doing now- just tacky, faux looking things that matched my copper hair, tanning bed skin, and Juicy Couture tracksuits. When I moved to Seattle I started working with better photographers (AJ! AJ! AJ!), improved my overall look, and began to venture into paid work. While it was nothing like my friend (another Anna- seriously gorgeous) was doing; she on the cover of Vogue Italy and walking the runways for coveted designers during Paris fashion week- I still enjoyed it. I knew I didn’t have a career coming out of these shoots, but there was always this building, narcissistic excitement that came before the photos were shown to me or posted on the internet. Even now I get that thrill now for certain projects.

Still, I’ve come to a point where I have been doing this little gig on the side for so long now that I know enough about it to have a rate card, stick to it (with few exceptions for friends or charity), and to be picky about the projects I take on. What I do find interesting and a bit funny in this little city in Cambodia is what constitutes a model. I’ve heard of many expat girls who have been raised in Cambodia or grown up in Phnom Penh and moved to Paris, Singapore, or the States to try and find modeling work but they just didn’t make the cut (height wise, weight wise, face wise…) so they headed back to the good old Charming City hoping to become the next Giselle Bundchen. What I wish I could tell them is to give up. I hate to be a dream killer, and if my mother had told me at 13 that a career as a model has tons of risk involved (ie: Terry Richardson, drug addiction, eating disorders, fucking diets, missing occasions to build real skills outside of Blue Steel-ing, and the short shelf life for most models) I would be furious. “THIS IS MY DREAM AND I CAN DO WHATEVER I PUT MY MIND TO!”, I would shout. Sorry honey, but no. Sometimes we just aren’t all born with Cara Delevingne’s eyebrows, Kate Upton’s rack, or Abbey Lee Kershaw’s cheekbones . That’s okay, there’s photoshop- and more importantly, there’s life beyond posing in front of the camera or strutting down a catwalk. 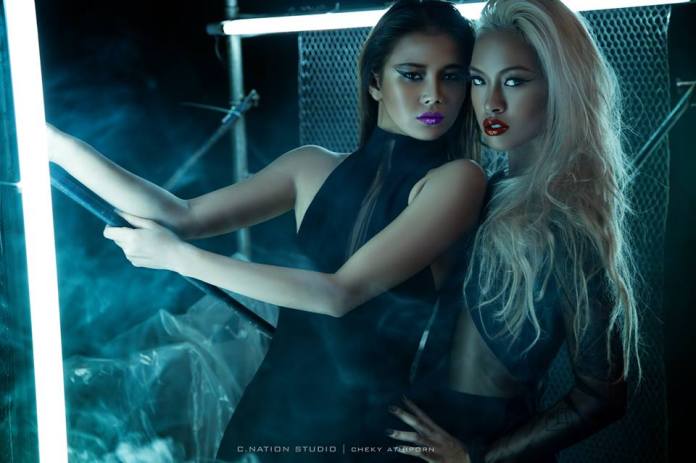 I do truly enjoy and take energy and positivity conducting and being part of photoshoots with specific clients, photographers, people, and brands- but a warning to the wise: look past the lens staring at you as you suck in donning a tiny bikini or couture gown. You’re fabulous- but make sure that the flash hasn’t blinded you to what reality has to offer. Working hard is all part of the package- as is reliability, motivation, wits, and skill; if you’re really trying to make the cut and think you have what it takes get out of Cambodia, find an agent, and try a size 00 on for size. Then decide if you want to put all of your Blahniks in one basket, because if you miss out on opportunities by slacking off and “modeling” now- what’s going to happen when the wrinkles set in, your metabolism slows, or you’re just another face in a sea of pretty people?

One thought on “Model behavior.”