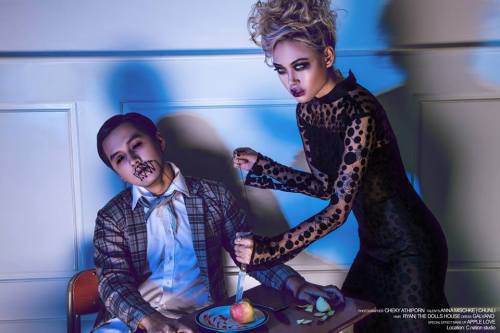 Today is the day when Facebook feeds are full of bared fangs, throngs of sexy nurses/teachers/kittens/cops/robbers/whatevers, and event invites boasting nights of fear, frivolity, and bloody shots shots shots shots shots! Halloween, here you are again.

I don’t remember what I  did for Halloween last year, so obviously it wasn’t that big of a deal, and the year before I just stole someone’s Oktoberfest hat and got really drunk off Absolut at a house party. I think that was the last time I really did much for the occasion. I did do a pretty fun photo shoot this year, THE BABYSITTER, that had Halloween written all over it- but other than that my plans for tonight are less than werewolf worthy. Now when all the “scary” things come out to play on the 31st of October, I can’t really think of anything other than how badly I want pizza- lots of pizza- and that totally works because Freddy Kruger’s face was fashioned after the scarily good savory pie by head makeup artist David Miller.