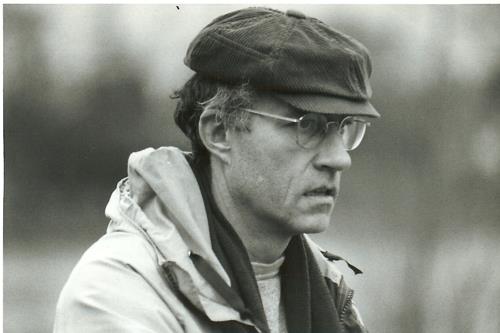 While he is not here physically, my father continues to make a poignant and daily impact on my life, and I can only presume dozens of others.

On his birthday, which would have been today, he would have per usual refused any sort of large celebration; he had an extreme dislike in being the center of attention. Not because of any bit of shyness or question of his own worth, but from what I understand it was his utter humbleness and complete satisfaction in simply being. He would have taken a bite of his favorite German chocolate cake and jovially muttered, “Is this really necessary?” while we looked on in adoration.

In all settings he commanded a presence, without even needing to utter a word. Not only because of his six foot four, broad shouldered frame and booming voice but the ease of his company. Sometimes he would surprisingly find himself urged on stage at a benefit gala to croon a song or two or standing at the altar, officiating the marriage of two young people setting out on a life together. You might find him in the middle of a a gathering in our garage, surrounded with his friends smoking cigars (some “dog turd” and others Cuban) and sipping Scotch or you might encounter him whipping up San Francisco Fish Stew to the sounds of Curtis Stigers or Ladysmith Black Mambazo on a Tuesday evening. On many occasions he would retreat to his study, engulfed in one of his hundreds of books nose deep in some obscure psychiatric study of diagnostics and statistics of mental disorders or the affects of alcoholism in a psychotherapy patient. He may have been reading Elizabeth Barrett Browning or Biblical texts- it didn’t matter what he was reading, he seemed to always welcomed a visitor.

My mother may have been the luckiest woman of her generation to have become Mrs. Harold Mischke, but I know that Dad felt like the lucky one from the start of their unparalleled relationship. They were both right in their feelings of blessing and bliss and we celebrate the day he entered the world and even the day he left it. I have full confidence that he rests in a place that could trump any birthday celebration we could offer him here.

Happy birthday, Dad. You are so loved.