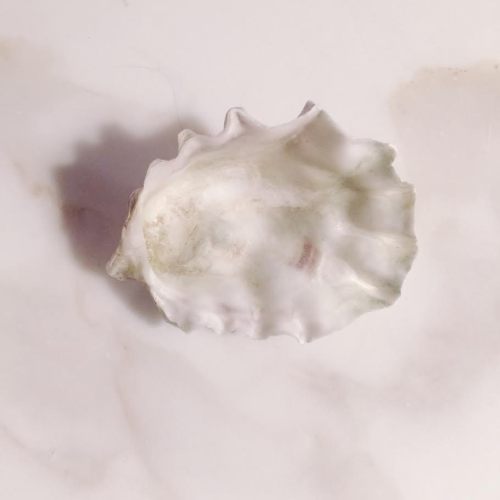 As my mom and I walked outside her house across craggy little Washington rocks along the beach in Gig Harbor, I scanned the vast landscape of a million eco systems with expert eyes: eyes that have taken in creatures and the skeletons of creatures year after year, eyes that hone in on a special little gift from the ocean or a fumbling, tumbling miniature crab trying to make its way back under a comforting rock.

I squat over remnants of hundreds of years of the sea, toying with a piece of slimy, fluorescent seaweed or turned an agate through my fingers and then fixated on one beaming half shell of a perfectly sized oyster. I took a few steps over to the glittering, empty casket and held it in my palm, the salt water leaving droplets on my palm. I smelled it, wondering how long it had been since it had housed a living, pulsating creature and felt the smooth insides then ran my finger along the rough outer shell. Then put it in my pocket.

As we continued our way down the shore slowly, I noticed a shock of bright purple and like a moth to a flame went to inspect. The most glorious open shell greeted me, glowing brightly with at least a hundred shades of purple and a perfect shimmer under the six o clock light. When I turned it over, it was encrusted with barnacles and the outer shell was an ugly greenish brown covered in lines. I immediately chucked the ugly shell back onto the beach and kept walking in search of tiny snails to poke and anemones to prod.

When emptying the pocket of my cardigan when I got home that night to look at my treasure of an oyster shell, I felt sad. The shell still held its lustre, but outside of its element I felt like I’d taken its little dead body away from it’s briny grave. I started thinking about the shell I had so quickly tossed back to the ocean, too. While we all want to be the brilliant, sun bleached, beautiful white oyster shell that now sits on my side table- it’s likely much better to be that other shell and it’s much more likely we are that other shell. Although its exterior was rough and tough, the inside was inexplicably beautiful– and had supported the life of so many others (the barnacles), even being distressed and weathered.

How many times do we discard something, or someone like I did that last shell simply because the outside wasn’t of perfection? How would we ever know the marvels of what was crafted and created so wonderfully beneath those layers of boring brown and ugly, crusted green?

Now I hold the oyster shell in my hand, rubbing the pad of my thumb across the smooth, slightly iridescent and contemplate how beautiful that purple shell was. That its beauty was only seen once it was dead. That we are all roughly hewn and imperfect. And that I hope to God that I can see past these aesthetic shortcomings when it comes to the stunning people around me; that I will see all of their generous shades of purple before they slip between my fingers.