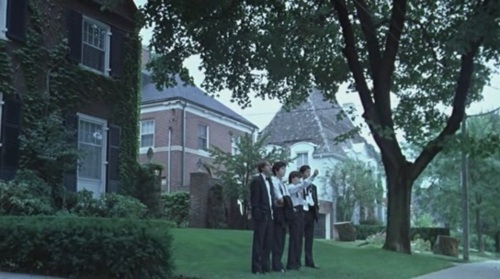 My favorite book of all time.

“Our amazement at being formally invited to a house we had only visited in our bathroom fantasies was so great that we had to compare one another’s invitations before we believed it.”

“She climbed the steps to the kitchen, closed the door behind her, and proceeded through the upstairs hallway. We could hear her feet right above us. Halfway up the staircase to the second floor her steps made no more noise, but it was only thirty seconds later that we heard the wet sound of her body falling onto the fence that ran alongside the house.”

“A few of us had fallen in love with her, but had kept it to ourselves, knowing that she was the weird sister.”

“We became acquainted with starry skies the girls had gazed at while camping years before, and the boredom of summers traipsing from back yard to front to back again, and even a certain indefiniable smell that arose from toilets on rainy nights, which the girls called “sewery.” We knew what it felt like to see a boy with his shirt off, and why it made Lux write the name Kevin in purple Magic Marker all over her three-ring binder and even on her bras and panties..”

“We knew, finally, that the girls were really women in disguise, that they understood love and even death, and that our job was merely to create the noise that seemed to fascinate them.”

“When she smiled, her mouth showed too many teeth, but at night Trip Fontaine dreamed of being bitten by each one.”